From the masterplan to the recovery of existing buildings, the intervention on the JW Marriot Venice Resort & Spa by Matteo Thun & Partners+ Luca Colombo was constantly inspired by a holistic vision and considered as a harmonious whole, paying attention to every single detail. The flooring was designed to recreate the old wooden flooring of the restaurant in the former National Recreational Club. The 10x60 cm porcelain stoneware strip tiles in four pastel colours (Architecture Warm Grey and White, Unicolore Acquamarina and Rosa Antico), laid in a herringbone pattern using the Italian method (i.e. placed in such a way as to form a perfect 90-degree angle) create an effect that hints at weaved rugs and broaden the creative possibilities of ceramic.

The new luxury JW Marriott Venice Resort & Spa is located in Sacca Sessola, dubbed the Island of Roses, one of the largest and most recent islands of the Lagoon south of Venice.

The island was artificially created in 1870, using the excavation material from the construction of the Santa Marta commercial port, and was completely transformed over the course of a century. The island was sold to the Municipality of Venice that used it for building the sheds of the oil depot. In 1892, some of the sheds were converted into a hospital for treating contagious endemic diseases. In 1914, the San Marco hospital was officially opened, and in 1927, works began to construct a new hospital, which was inaugurated in 1937. A large park, thermal power plant, depots, workshops, water tower, and National Recreational Club with a cinema were all built around the pavilions. The hospital closed down in 1979, until 2015, when the Marriott Group entrusted Matteo Thun & Partners + Luca Colombo with the restoration and design project, the extraordinary result of which earned them a special mention in the public and service buildings category at the 11th edition of the international architecture Grand Prix.

The firm, supported by a team of specialised restorers and in close collaboration with the Superintendence of Venice, decided to keep the old exposed walls and build the new facility within them to protect the historical character of the buildings.

The aim of the masterplan was to divide the island into three main parts: the main building of the hotel, the conference centre, and the Art Nouveau residence. The main building of the Resort houses 230contemporary Venetian-style suites and was obtained from what was the former San Marco Hospital. The large panoramic terrace with the addition of an infinity pool and the panoramic restaurant overlooking Piazza San Marco were the main architectural changes.

The conference centre and residence are located next to the main complex. The Art Nouveau residence was the home of the director of the former hospital and has been transformed into an elegant holiday villa with a private garden, swimming pool and a spectacular view over Venice. 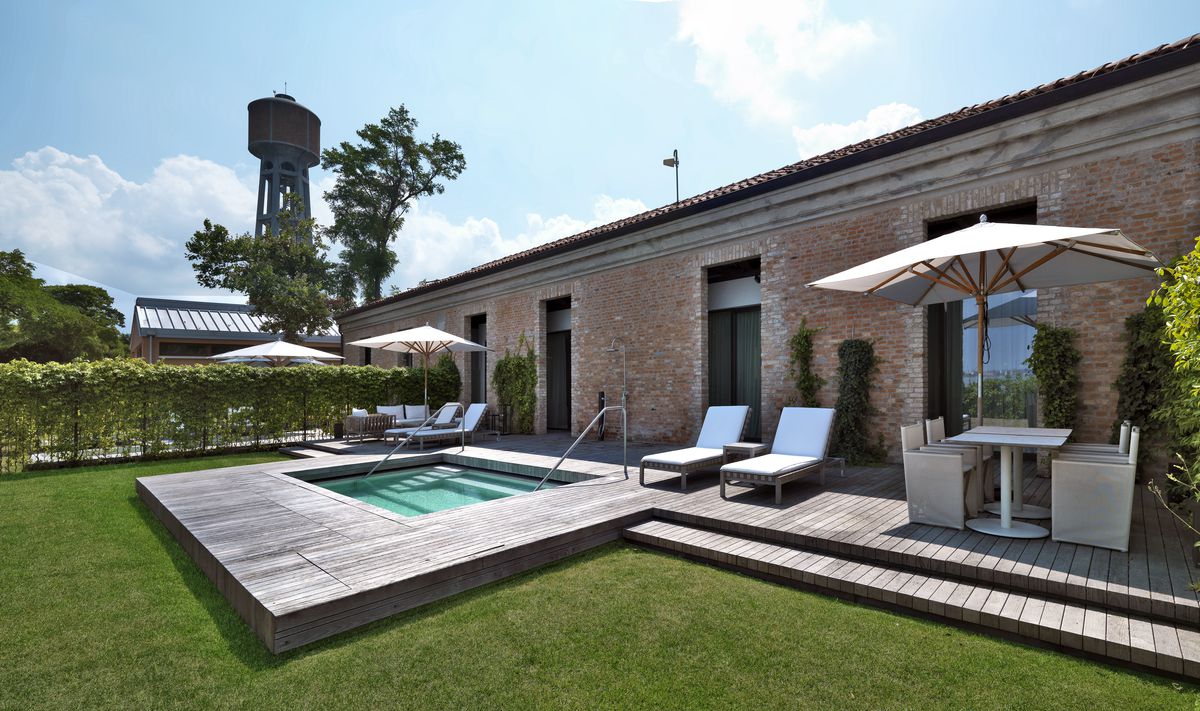 The ancient façade of the former National Recreational Club was also reconstructed. Today, the building houses the restaurant near the private heliport and the spa. 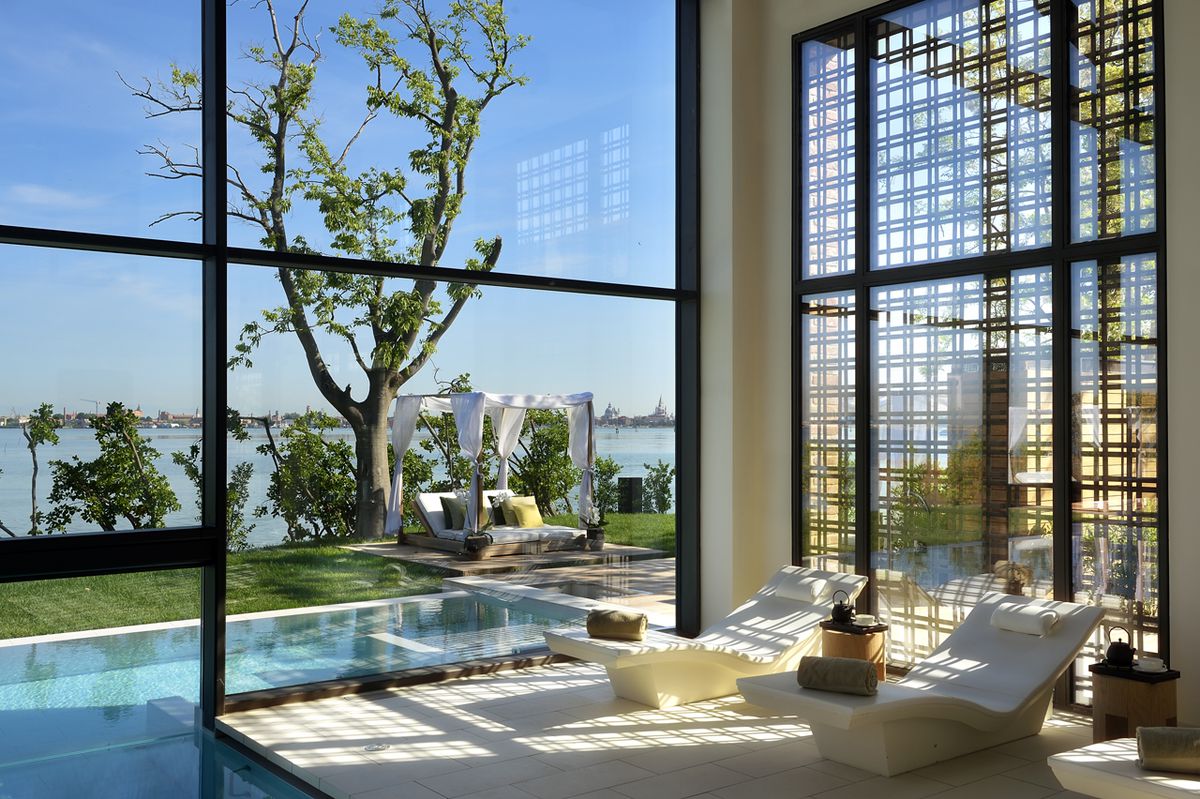 Next to the former National Recreational Club is the Maisonnette Suite, a two-storey concrete and steel building with a copper roof partly reconstructed within the old walls.

In addition to the olive grove and the park, there is a beautiful geometric garden that opens onto a large orchard, which serves the resort’s restaurants. A third green area has been planted with turnips, which help with soil regeneration.

The reopening of an underground canal has restored the special lagoon atmosphere characterised by water, slowness and silence. The JW Marriot Venice Resort & Spa is a ‘three zero’ resort – zero kilometres (meaning it uses only local produce), zero CO2, zero waste – away from the noise and bustle of the city. 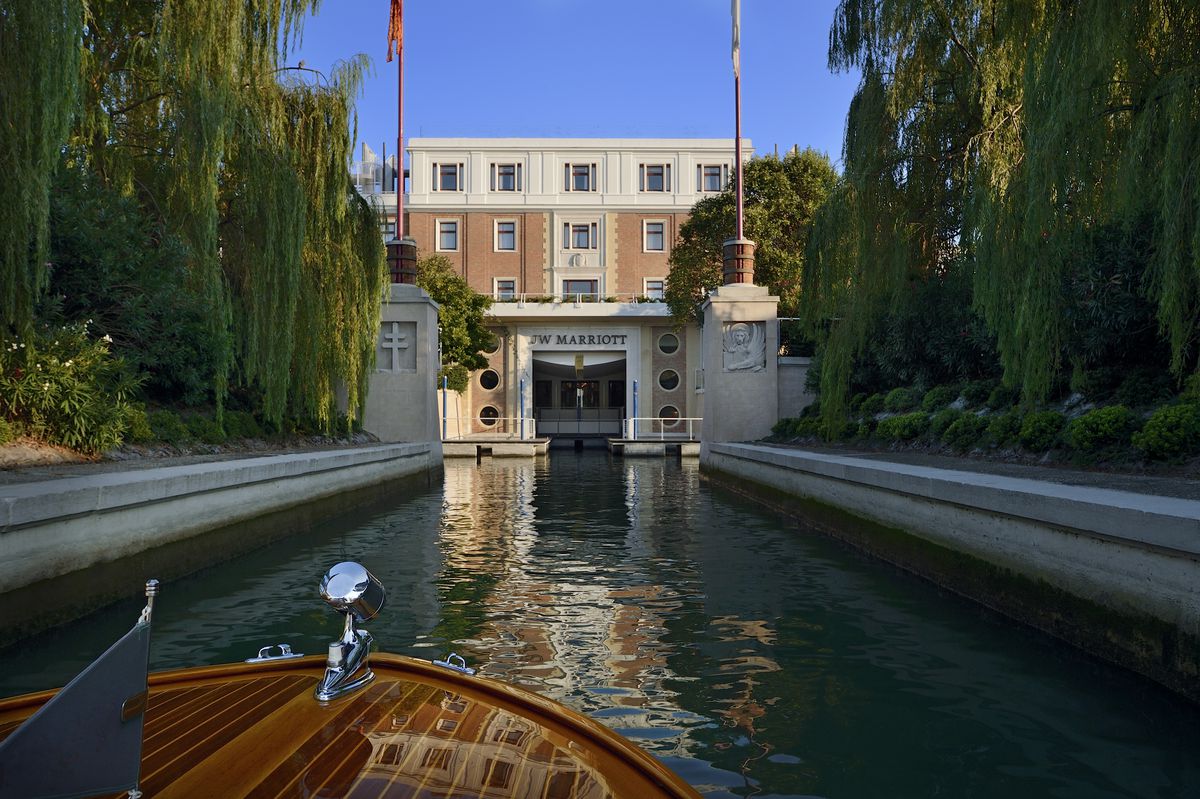